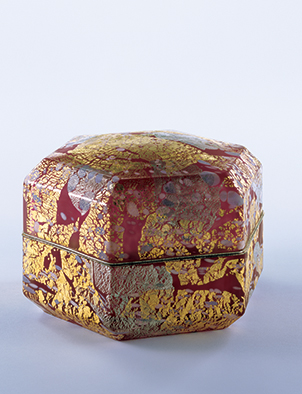 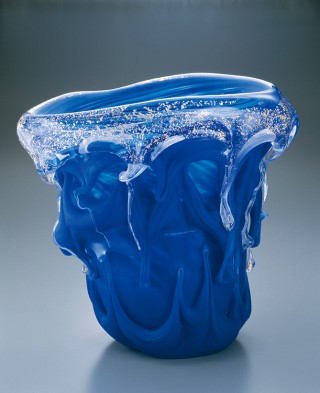 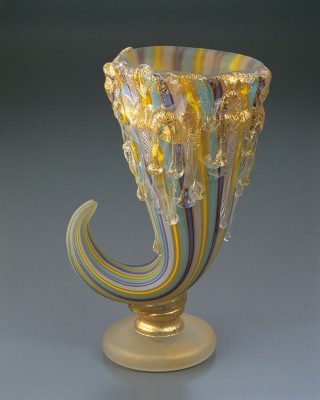 One of Japan’s leading glass artists, Kyohei FUJITA, was born in Tokyo in 1921, and in 1940 he entered the Craft Department of the Tokyo School of Fine Arts (now the Tokyo University of the Arts) to study metal carving.

After graduating, he entered the Iwata Glass Company but soon left to pursue a career as an independent glass artist. In 1964 he showed a flowing glass object, entitled ‘Rainbow Colors’, which received a lot of attention. Subsequent to this, after many years of trial and error, he exhibited his ‘Ornamented box’ in 1973, reviving traditional Japanese aesthetics in a contemporary form, using glass as his medium and receiving high acclaim for his the unique creativity. The following year, he continued to develop this ‘Ornamented box’ series that went on to become representative of Kyohei FUJITA’s glass art. It was particularly well received in the West as being a contemporary form of the ‘Rimpa’ School and was highly praised for its refined beauty.

In 1977 he began work in Italy, redefining the history and traditions of Venetian glass with a new aesthetic, producing numerous Fujita-style Venetian vases. Also in Italy, he began to produce large-scale objects that he first showed in 1984, their unrestrained forms enlarging his world of expression as a contemporary artist. In addition to these achievements, both in Japan and abroad, he also contributed widely in the development of glass education and the glass world in general, becoming recognized as a Person of Cultural Merits in 1997 and receiving the Order of Cultural Merit in 2002.

This exhibition will include approximately sixty works, covering his whole career, in order to present the fascination of Kyohei FUJITA’s glass art and a view of his unique world of expression.

With this exhibition ticket, you can view both the Collection Exhibition and the Glass Art Garden.